The discovery of a new species of Fishing spider was announced at the ninth annual World Science Festival, Brisbane, Australia (9-13 March 2016).

Fishing spiders are semi-aquatic spiders that hunt by waiting at the edge of a pool or stream, resting six of their eight legs on the surface of the water, waiting for vibrations announcing the presence of their prey, a procedure that relies on the waves created from something landing on the water to indicate movement. Along with insects their prey can include fish, tadpoles, and even cane toads; when they detect the ripples from prey, they run across the surface to it and subdue it using their claw-tipped forelegs, then dive under the water and carry it back to shore to eat. 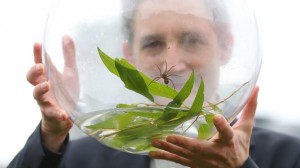 The newly discovered spider is native to freshwater streams around Brisbane. There are around 100 species of spider in the genus Dolomedes, different species can be found around the world in North America, Europe, and New Zealand as well as Australia, and with the exception of one tree-dwelling species they all employ the same method of hunting with the water surface serving the same function as a web does for other spiders.

briangreenei  – Latinized name. Honouring Brian Greene, a leading theoretical physicist and co-founder of the World Science Festival, who said, “With the announcement last month of humankind’s first detection of gravitational waves, ripples on the surface of space and time, I am particularly honored to be so closely associated with a spider that has its own deep affinity for waves.”