A report in the March 30 issue of Current Biology indicates that Fangblenny fish venom most likely causes a sudden drop in blood pressure in would-be predators that have been bitten by blennies.

The Blackline fangblenny is a species of Blenny belonging to the Family Blennidae, its one of a number of similar small species (generally ranging from 4 -10 cms in length, the Blackline being at the upper end of the range) sometimes referred to as saber-toothed blennies. Their distinguishing characteristic is the possession of a pair of large curved canines, mounted at the front of the lower jaw, which have a prominent groove associated with venom glands, that they use for defence against predatory fishes. Interestingly a number of non-venomous blennies have evolved similar colour patterns and swimming behaviour enabling them to mimic their venomous relatives, a process known as Batesian mimicry. 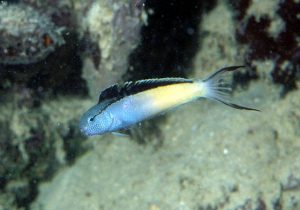 When researchers analysed extracted fangblenny venom, they found three components – a neuropeptide that occurs in cone snail venom, a lipase similar to one from scorpions, and an opioid peptide. Surprisingly, when they injected the fangblenny venom into lab mice they found it to be apparently painless, as usually fish with venomous dorsal spines produce immediate and blinding pain, this indicates a different mechanism at work; although, as the researchers used rodents for the pain test, they can’t entirely rule out the possibility of blenny venom causing pain in fish, but it seems plausible that the neuropeptide and opioid components may cause a sudden drop in blood pressure, most likely leaving any attacker disorientated and unable to give chase giving the fangblenny a chance to escape. While the feeling of pain is not produced, opioids can produce, at least in mammals, sensations of extremely unpleasant nausea and dizziness.

An incidental finding from the study was evidence suggesting that fangblenny fangs evolved before the venom whereas usually, as in snakes for instance, some sort of venom secretions evolved first, before the elaborate venom delivery mechanism.

nigrolineatus – Latin, nigro-, niger, black, sable, dark, dusky; -lineatus, line. Name referring to the narrow black stripe extending from the rear of the eye along the base of the dorsal fin to the base of the tail which is the most distinctive characteristic of the species.