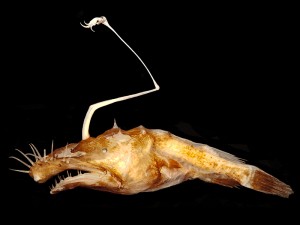 Discovered during a Natural Resource Damage Assessment conducted by the National Oceanic and Atmospheric Administration after the Deepwater Horizon oil spill in 2010. A small deep sea species of Wolftrap angler (1,000 to 1,500 metres, around 5cms in length) with a prominent esca. Different species of anglerfish can be distinguished visually by the details of a structure called an esca (Latin, food, bait) that projects over their heads like a fishing rod and is believed to act as a lure to attract prey. This organ is located at the tip of a highly modified, elongated dorsal ray, in some species the esca is home to symbiotic bacteria that are bioluminescent, producing light (a rare commodity in the depths of the ocean) and is presumed to aid in the attraction of prey. 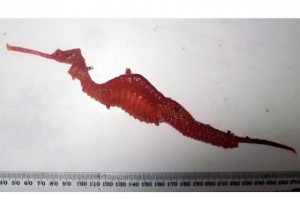 Only the third known species of seadragon, and the first to be discovered in 150 years, possibly because it lives in slightly deeper waters than its relatives. A relatively large species, around 24 cms in length, it has rarely been previously encountered; the coloration suggests it lives in deeper waters than other seadragons since red shading would be absorbed at depth, effectively serving as camouflage.

dewysea – Latinized name, honouring, “… Mary ‘Dewy’ Lowe, for her love of the sea and her support of seadragon conservation and research, without which this new species would not have been discovered.” Of the Lowe Family Foundation.