Haddock featured in the media on the 16th March with various stories indicating that the fish, a popular choice in the UK, was “being taken off the menu” owing to lack of sustainability (see: Guardian). As a result of a change in scientific advice the Marine Conservation Society (MCS) downgraded the sustainability ratings of Haddock on its Good Fish Guide website of three haddock fisheries in the North Sea and West of Scotland area. The two North Sea haddock fisheries are now rated 4 (amber), and the third has dropped from being a good choice (rated 2) to one to eat only occasionally (rated 3), meaning they’re no longer on the MCS recommended green list of fish to eat.

Haddock are members of the Gadidae, a family of marine fish included in the order Gadiformes, known as the cods, codfishes or true cods. This family contains many commercially important species including cod, haddock, pollock, and whiting.

Similar to Cod in appearance, although smaller reaching sizes of up to 1.1m (Cod reaches up to 2m), it has a dark coloured lateral line and features a prominent dark blotch over the pectoral fins that’s sometimes referred to as the “Devil’s thumbprint” or “St. Peter’s mark”. Found in the North Atlantic Ocean at a depth of between 80 to 200 m, at temperatures between 4° and 10°C, it’s a demersal feeder, feeding mainly on small bottom-living organisms such as crustaceans, mollusks, echinoderms, worms and fishes.

Haddock is fished all year round and is a very popular food fish, along with Atlantic Cod and Plaice. It is one of the mainstays of the British fish and chip shop, and is also often enjoyed smoked. 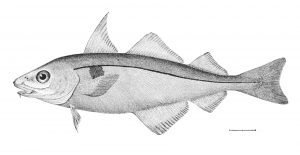 The reporting of this story in the media appears to have resulted in a certain amount of misinterpretation of the situation with various fishing organisations being very vocal in response to any suggestion of a lack of sustainability and the similarly acronymed Marine Stewardship Council (MSC) also querying the MCS’s actions (see: BBC).

The MCS has since issued a response to the media coverage of this story (see: MCS)

Melanogrammus – Greek, Melano-, melanos (μελανος), black, dark; –grammus, gramma (γραμμα), that which is drawn, stroke of a pen, a line; lined – likely referring to the presence of the dark lateral line.

1907 Rachel Carson (1907 - 1964) was born on this day. She was a US marine biologist and conservationist, best known for her role in promoting the modern environmental movement. Carson was at the U.S. Bureau of Fisheries (later known as the Fish and Wildlife Service) initially working on fish population data and producing literature for the public, later becoming chief editor of publications (1949). She wrote a series of popular science books Under the Sea (1941), The Sea Around Us (1952), The Edge of the Sea (1955), culminating in her best known work, Silent Spring (1962).
Silent Spring documented the detrimental effects on the environment of the indiscriminate use of pesticides and brought environmental concerns to the attention of the American public; it inspired an environmental movement that led to the creation of the U.S. Environmental Protection Agency.
Carson is honoured in the names of three species of mollusc under rachelcarsonae.