This new species, subsequently described as Palatogobius incendius, was observed and collected over the course of several submersible dives off the coasts of Curaçao and Dominica between 2013 and 2016 as part of the DROP project (see below). During this same time lionfish predation of the then undescribed species of goby was also observed and recorded by the Curasub submersible. The description of both the new species and the lionfish predation can be found in “A new mesophotic goby, Palatogobius incendius (Teleostei: Gobiidae), and the first record of invasive lionfish preying on undescribed biodiversity” at PLOS One.

Specimens of Palatogobius incendius, were collected by the Curasub using the two hydraulic arms, one equipped with a quinaldine-ejection system to anesthetize fishes, and the second equipped with a suction hose to collect immobilized individuals. Captured specimens were stored in a vented acrylic container for transport to the surface. The depth range from which these fishes were collected from is termed mesophotic, a term used to describe coral reefs growing from around 30 m down to around 150 m in both tropical and subtropical water.

Mesophotic, a modern scientific term derived from ancient Greek, Meso-, mesos (μεσος), middle; and phot- (φωτ-, φῶς), light; -ic, suffix meaning after the manner of, of the nature of, pertaining to, of. 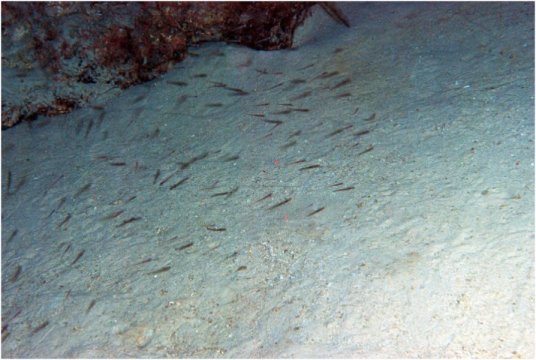 Palatogobius incendius has been collected on deep reefs at depths of 88 to 200 metres from Curacao and Dominica and observed off Roatan, Honduras. The species occurs exclusively in hovering schools ranging in size from as small as 5 to 10 individuals (rare) up to 50 to 200 individuals. Schools are most frequently found at the top or bottom of vertical walls off Curaçao and Dominica, but off Roatan more than a dozen schools of P. incendius were observed collectively comprising as many as 1000 individuals over a long, gradually inclining stretch of sand and small rocks from around 150 to 170 m depth. Schools of P. incendius generally comprise individuals at multiple life stages, ranging from moderately developed larvae to adults. Off Dominica larger swarms of minuscule fish (about 5 mm TL) were also observed, possibly very recently recruited P. incendius larvae, given their size, abundance and depth range. Individuals in these swarms were too small to be captured, and were observed traveling only a few cm off the bottom rather than hovering in a cloud well above the substrate. These schools of post-larvae were 1–2 m wide and up to 5 m long, and moved steadily upslope at approximately 0.15 m/s, navigating laterally around obstacles in a fashion superficially similar to a wide chain of marching army ants.

The schooling behaviour of Palatogobius incendius may be leaving them open to the danger of lionfish predation, with their schools being easily  driven or corralled by the lionfish into corners of the reef where they are vulnerable to predation. 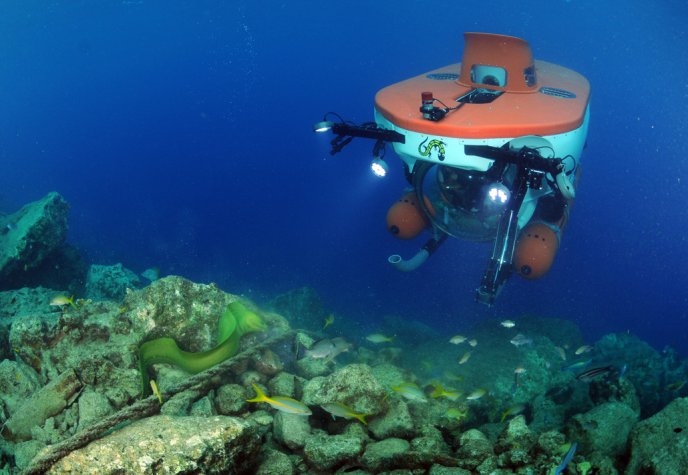 In recent years the Smithsonian’s Deep Reef Observation Project (DROP) has contributed a significant body of information on the taxonomic makeup of deep-reef fish communities in the Caribbean. Through the use of Substation Curaçao’s (www.substation-Cuaracao.com) manned submersible, the Curasub, DROP researchers have described many new species of deep-reef fishes, including several that may be susceptible to lionfish predation due to their body size, shape, and behavior.

That a previously unknown species was collected for the first-time whilst simultaneously being found to be susceptible to predation by invasive lionfish species raises the question of how many other new species are in danger before they’ve been discovered. The greater depths where these new species are being discovered is also the reason behind their discovery. Depths beyond the range of conventional scuba diving are being opened up to discovery through the new technology of submersibles such as the Curasub and through new advanced diving techniques, unfortunately these greater depths also represent an environment where the lionfish feels at home. 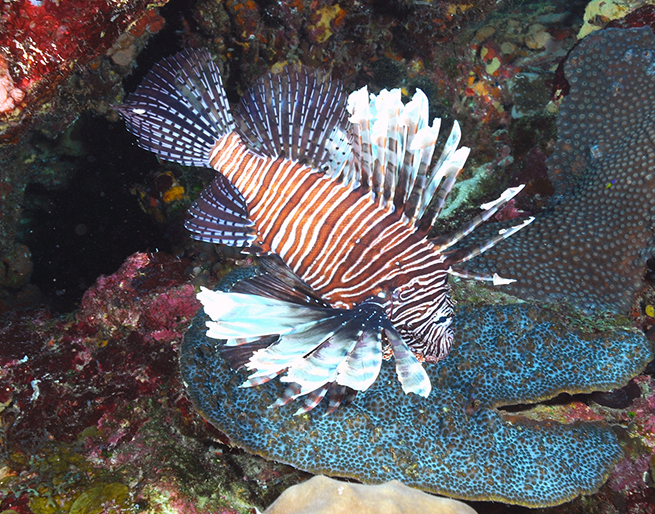 Lionfish are invasive species from the Indo-Pacific, likely introduced into Atlantic waters through the marine aquarium trade either as escapees or as released specimens. They are primarily crepuscular hunters, and hunt more actively on overcast days with less light and at greater depths. In the western Atlantic lionfish are tolerant of, and thrive at, the cooler temperatures of the deeper reefs, where they have become locally abundant. This is especially concerning for native deep-reef fishes that occur from 50–300 m, where reduced light conditions may make them more susceptible prey for actively hunting lionfishes.

The composition of these deep-reef fish communities differs from that of shallow reefs, and is made up primarily of a unique fauna that includes many undescribed species. This results in a community of poorly known or undescribed species that may be negatively affected by invasive lionfish. To date little is known about the lionfish predation on deep-reef fish assemblages.

Palatogobius – Latin, Palat-, palate, roof of the mouth; -o-, connective vowel; –gobius, a fish of small value, the gudgeon (classical); a fish belonging to the family Gobiidae (modern). “The generic name Palatogobius is in reference to the teeth that may be present on the roof of the mouth.”

incendius – Latin, incendium, a burning, fire, conflagration. “The specific epithet incendius is an adjective formed from the Latin root incendium meaning ‘fire.’ The scientific and proposed common names refer to the bright orange, yellow and reddish-pink coloration on the body, head and fins.”