8th May – A Minke whale has washed up on the beach near Mablethorpe, Lincolnshire, England, in the vicinity of the Sea View car park. The whale, variously described as being 4 or 5 metres long and estimated to weigh up to two tonnes, is the sixth whale to wash up on the east coast of England in three months (see: Sperm whale). 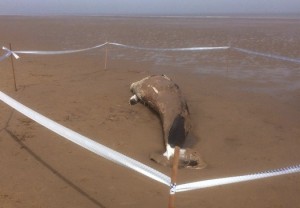 The Minke whale is the smallest of the baleen whales found in UK waters, measuring 7 to 10 metres when fully grown, females usually slightly longer than males, and weighing up to 9,200 kg. The body is slender and streamlined, the head narrow and pointed. They have a small sickle shaped dorsal fin positioned about two-thirds of the way down the back, this can be used as a unique feature to identify individual animals. The dorsal fin and back are dark grey or black, the belly bright white, and there is a distinctive white band on the upper side of each pectoral fin. 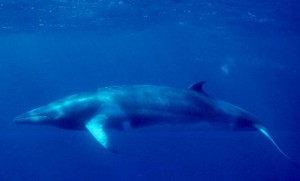 Minke whales are generally a solitary species with a lifespan estimated at around 40 to 50 years. They have a wide distribution and are found from the tropics to the ice edges in the northern hemisphere, although their annual movement patterns are not fully understood but they are thought to make a general migration between tropical breeding grounds in the winter, and colder feeding regions during the summer.

acutorostrata – Latin, acut-, acutus, sharpened, pointed, sharp, cutting; -o-, connective vowel; -rostrata, rostratus, having a beak, hooked, with a crooked point, beaked, with a curved front. Alluding to the shape of the head.

The name Minke is said to have derived from one of whaler Svend Foyn’s crew by the name of Meincke (likely a novice), who mistook a school of these whales for blue whales. Whalers all over the world considered this incident so amusing that they used his name as a household word to describe this species.