Tadpoles of the Indian dancing frog have been seen for the first time.
Although scientists have long known about the adult frogs and their graceful displays, or dances, which lure mates and ward off rival males, the juveniles of the species had never been seen before. That’s likely because during this developmental stage, the tadpoles live entirely below the stream bed surface, buried deeply in the silt and gravel. The newly discovered tadpoles have flat, eel-like bodies and powerful muscular tails adapted for wriggling through silt and mud. 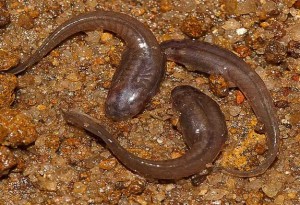 Micrixalus species frogs are popularly known as dancing frogs due to their display behaviour involving waving their feet in the air, known as “foot-flagging”, to attract females during the breeding season. Males tap their hindfeet and extend it upwards, subsequently stretching the foot outward and shaking it, both at prospective mates and rival males.

They make their burrows in the forest rivers of the Western Ghats mountain range, along India’s west coast and, up until now, were believed to be the only species of frog or toad where the tadpoles remained unidentified.

1772 Étienne Geoffroy Saint-Hilaire (1772 - 1844) was born on this day. He was a French naturalist, professor of zoology at the Muséum National d'Histoire Naturelle. Geoffroy accompanied Napoleon on his campaign to Egypt (1798 - 1801) as part of the scientific expedition as the zoologist responsible for the vertebrates.
Geoffroy Saint-Hilaire described around 55 aquatic taxa and is honoured in the names of a number of species under geoffroy(i).